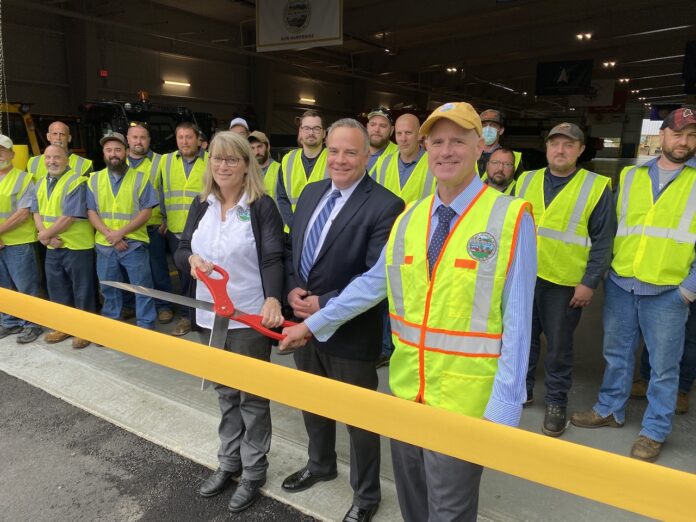 On Friday, May 20th, The City of Rochester held a ribbon-cutting ceremony for the newly opened Public Works facility on Chestnut Hill Road.

Mayor Paul Callaghan was on hand to present remarks. In his speech, Callaghan celebrated the Public Works staff and the “important work they do to maintain a high quality of life in Rochester.”

“They work every day towards maintaining a safe and productive transportation system, providing high-quality drinking water, treating our waste while protecting our environment, and maintaining public facilities to be enjoyed by our residents,” said Callaghan. “Much of what they do each day toward this goal is seen, and much of it is unseen.

According to Callaghan, the new Public Works facility has been a long time in the making. From 1950 to 2022, DPW missions were conducted from a facility that was built to serve a rural city of the late 1940s. Although modified over the years to accommodate a growing work demand, the former facility at 45 Old Dover Road was “undersized and inefficient decades ago.”

“Delivered under budget, this facility boasts 55,000 SF of administrative, engineering, and shop spaces and a meeting center,” said Callaghan. “A unique feature is its vehicle storage area which protects all large trucks and equipment from the weather when not in use, adding to their service lives and allowing a much more efficient prep for winter storm operations. There is a wash bay to routinely remove salt, dirt and grime from vehicles, extending their use. Additionally, a 406,000 KW-hr solar panel system on the roof will power the facility much of the year.”

Callaghan stated that on average, a municipality has the chance to “significantly reinvest in its Public Works facility about every 75 years.”

“In Rochester — we did it right,” remarked Callaghan. “It was our vision to construct a facility that would as robust in 30 years as it is now. During the process of design and siting the facility, the construction cost index increased by over 20%. We realized that to construct as designed, would require more funds. It’s a credit to the City Council that they did not waiver when presented an option to redesign the facility to make it smaller. Had they waivered, this facility would be too small to serve our City.”

Director of City Services, Peter Nourse, noted that the project began (and obtained critical construction milestones) before the effects of Covid-19 set in on the construction industry, marring the project with logistics, material, and labor impacts.

According to Nourse, “If built today, the facility would likely cost millions more to construct and a completion date would have been uncertain.”

Callaghan concluded by saying “Rochester has waited a long time for this facility. I wish to thank the City Council and the tax and ratepayers for making this happen.”